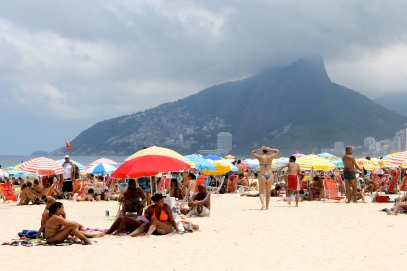 Rio Rio Rio! What a trip. This past Friday my friends and I took a 6 hour bus trip to Rio De Janeiro leaving from the Tietê bus Terminal in Sâo Paulo and arriving in the Rio Novo Terminal in Rio De Janeiro. A 6 hour bus trip may sound miserable but in all honesty it was a relaxing ride. The seats reclined almost into beds, we received blankets and snacks, and it was quite easy to sleep the whole way. We rented an apartment in Copacabana which was only about a 5 minute walk from the Copacabana beach. For anyone traveling or planning to travel to Rio, I would suggest staying in Copacabana. From there I felt that it was a very good location to be. There were metro stations, many bus routes, accessible taxis, many places to eat, many hotels, and a beautiful beach (photographed above). We spent many of our days in Rio at the beach but we were able to venture out of Copacabana and take part in some other activities around the city. One of my favorite views that I have seen thus far in this world was found this past week in Rio (the Corcovado mountain which is located in the Tijuca Forest). Here you can find the famous Christ the Redeemer statue. In order to get to the peak of the mountain where the statue is located, you can either drive/walk on a narrow road or simply ride the Corcovado Railway to the top. I choose to ride the railway which was really enjoyable and went straight through the forest to the top. Once at the top of the mountain not only was the statue itself a breathtaking view but the view looking down on the city was phenomenal. Another memorable event we took part in was going to the Samba Parade at the Sambódromo. During the parade, many different samba schools (samba is a brazilian dance) dressed in elaborate costumes parade down a long alley with floats surrounded by thousands of spectators. This is a huge event in Rio and people from all over the world come to Brazil during the carnaval time for this event. The parade is a several day event and we decided to go on Sunday. Unfortunately, it did rain the whole night but to my surprise that didn’t stop the parade or the parties from taking place. It’s amazing how much positive energy brazilians have and how special this time of Carnaval is for them. My friend Daphne who has brazilian relatives was extremely lucky and had the chance to dance with one of the samba schools in the parade! Her costume was an indian costume covered in blue and green feathers, it was absolutely beautiful and she did a great job. The only other tourist spot I really wanted to see was the famous steps (Escadaria Selarón) in the Lapa neighborhood. Thankfully one night while venturing around a street party in Lapa we came across the stairs! It was a really cool way to visit the stairs and it wasn’t the typical day trip that the usual tourist would take. One thing I didn’t do that I regret is to go to the Sugarloaf Mountain. There you can take a cable car to the top of the mountain and the views are quite amazing. If I return to Rio I will definitely put Sugarloaf first on my list of things to do. Overall the trip to Rio was a great success and I would definitely suggest it as a good place to travel to if you’re looking for great beaches, 24/7 parties, and wonderful views with some history mixed in. In addition to the places I visited, I would like to add that if you go to Rio you MUST try as many Sucos (juices) as possible. You can find juice bars everywhere and the options of juices and smoothies are endless. My personal favorite was the Acaí fruit smoothie. All of the fruit is extremely fresh and rich in flavor and you will not regret getting one!